All the information regarding KaM Remake Tournaments

Greetings to all! The Kamclub.ru site has a tradition to hold tournaments every six months, and this year is no exception. We are proud to announce the launch applications for the upcoming championship:

Championship Date: from April 28
Type of game: 1 vs. 1.
Allowed Games: KaM Remake (KMR), TSK*, TPR*.
Map: "Coastal encounter", but if agreed with the judge and the opponent you can choose any other fighting map!

- After the match, to confirm the victory of (if there was no judge present at the battle) you will need to submit 2 screenshots. One needs to be done at the end of the battle. And one of the victorious outcome of the meeting. If the winner can not make a screenshot of winning, then the resulting screenshot can be provided by the defeated side! If you have any problems with the screenshots in TSK/TPR, you set this registry key PrntScr (Installation Guide for Windows 7). If the battle took place in KaM Remake (KMR), it is desirable to keep the replay of the battle.

- WARNING! If you choose TSK or TPR then there are following rules:

A. There must be two fights. With the change of color and position (to negate archers shoting range bonus).
B. If there is a draw, then the final 3rd game takes place in KaM Remake (KMR).

If you can not play the battle because of the problems with the Internet, we recommend a third party (or a judge) to host the server and players to join it. In this case, you must put a "union" with the host.

Award: Medal and the name on the front page of kamclub.ru, the glory and the game Unreal Tournament III on Steam. (Number of prizes can be changed and added. If someone is willing to sacrifice anything, I would appreciate).

Send a request to participate in the championship in this topic may be in the form:
A. Nickname (for a single game and tournament tables.)
B. ICQ, Skype or other contacts for communication.

I will take a part!

BTW this is a topic, where you can make an application form for participating http://kamclub.ru/forum/30-748-1

powah gamin! - trusted source of best KaM Remake replays!
Conquest of Paradise - balanced 1v1 map in the spirit of maps like Golden Cliffs or Across the Desert
>>
<<

Well we have no good opportunity to play games with building before remake? so we played battles. However the organization of such building tournament is very hard process in remake also (remember canceled Christmas tournament). So we organize battle tournaments.

I think that if more people will take part in tournaments then the economy "section" will form up as well.
Knights Province at: http://www.knightsprovince.com
KaM Remake at: http://www.kamremake.com
Original MBWR/WR2/AFC/FVR tools at: http://krom.reveur.de
>>
<<

I wanna to report that I successfully defended my title!

Location: Near the inn

Good job lord
"No one saves us but ourselves. No one can and no one may. We ourselves must walk the path" - Buddha
>>
<< 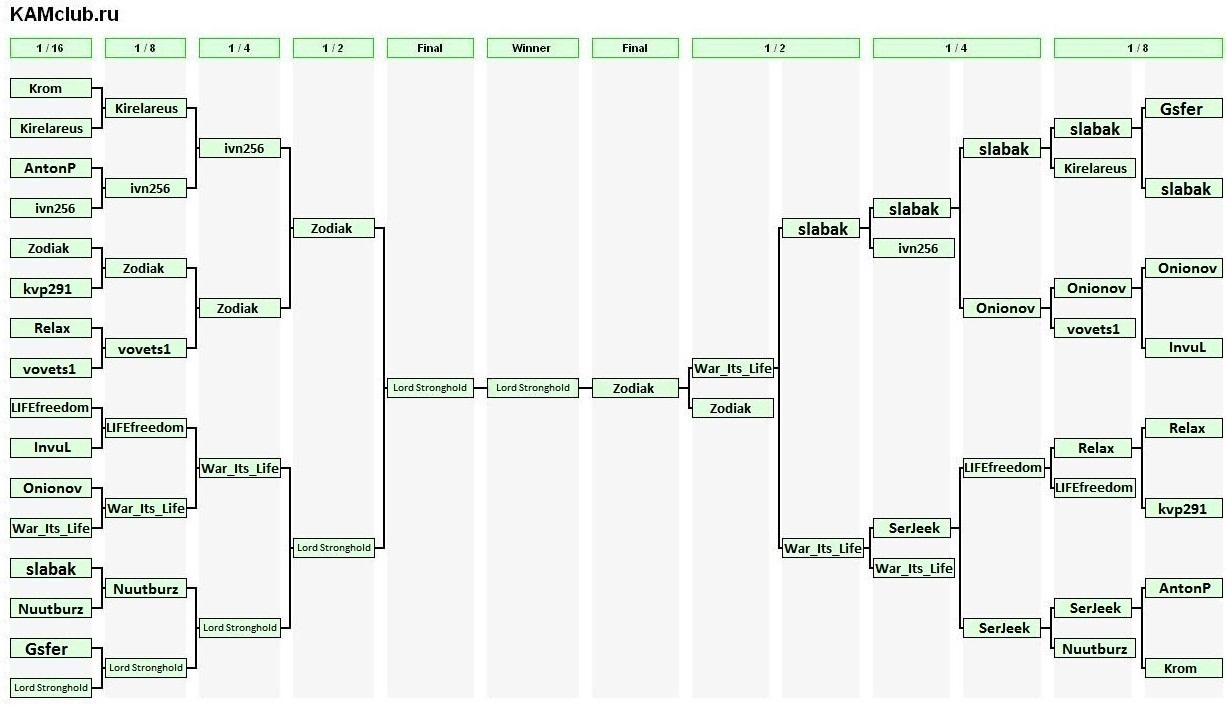 I wanna to report that I successfully defended my title!

Can I ask something offtopic here?
Does anyone know Relax? From which country he is?

Because an old friend of me uses that nick a lot in strategygames too.

Location: Near the inn

since it is from kamclub russia i think he is russian
"No one saves us but ourselves. No one can and no one may. We ourselves must walk the path" - Buddha
Post a reply
17 posts 17 posts • Page 1 of 2 • 1 2

Users browsing this forum: No registered users and 0 guests